I Am Not Frater Barrabbas 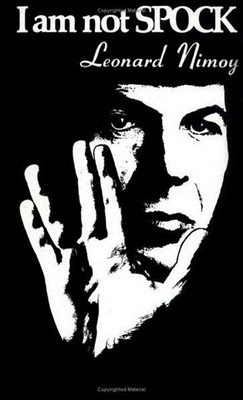 Many years ago, after Star Trek (the original series) had gone off the air and the fan mania began to really spike to a desperate level, Leonard Nimoy wrote a book that sought to explain to that fan base that he was just an actor, and he was not Spok. Mr. Nimoy discussed how some fans had approached him with absurd requests that only the character Spok could have done, such as mind-melding or other attributes associated with the TV show character. This caused Leonard Nimoy some consternation, since he was, after all, just an actor and not an alien named Spok. So he wrote this book to explain what was patently obvious to himself and many others; that he was first and foremost a plain old working stiff like everyone else. There was nothing sensational about him, nothing special - in fact, he didn’t even consider himself a talented actor.

This was a rather modest pronouncement, since out of the entire cast of Star Trek, Mr. Nimoy has shown not only a competent acting ability, but also abilities in the disciplines of script writing, movie directing and producing. Even so, you have to admire him for telling his public that he wasn’t Spok. (Contrast that to Clayton Moore, who all but told his public that he was the real “Lone Ranger.”) The character Spok was just something that Mr.Nimoy had invented, a kind of acting persona useful for a TV show that only lasted a few seasons. Little did he know at the time that the character Spok would become so well known and loved by his fans that it would take on a life of its own in their minds and imagination. What he had to do was create some boundaries for himself so that others would realize that Spok was a fictional character.

So why am I relating this story and what does it have to do with the surprising title of this article? The reason is subtle but also obvious. My pen name, Frater Barrabbas, is a fictional persona that I use to promote the books that I have written, my system of magick and the magickal order that I represent to the public. While I may illuminate ideas, insights and opinions that do indeed belong to me, my author’s persona, Frater Barrabbas, doesn’t really exist. In truth, I am just an ordinary person who has had some rather unusual life experiences, but then again, so have many other folks. My intention is to share ideas and perspectives about ritual magick, and to aid and assist my readers in mastering their own process and doing the magick for themselves. What I am not trying to do is to create a cult of personality around myself.

However, I have recently been getting, from time to time, more unusual emails making fairly outrageous requests of me. A few have presented me with terrible life issues that are afflicting them, and have asked me to intervene so that through magick I might miraculously change their fortunes. These requests, if they are true, deeply touch me with sadness, but there is little that I can actually do to help them. Most people send me kind words or encouraging compliments, others tell me that they disagree with what I have written - all of this is well received and appropriate. Yet it seems that I am starting to get more outrageous emails as my popularity and notoriety expands, so I felt compelled to write this revealing apologia.

I have found that when I write articles and state my opinions to the public, and even banter with other occultists, it’s always within the persona of Frater Barrabbas. Seldom do I actually reveal my true self hiding behind the scenes, since that real person doesn’t want publicity or any notoriety to intrude into a very private life and career. While it might be true that such a revelation might not jeopardize my mundane existence, I have found that it is more expedient to use a pen name. Using an author’s persona also forces me to apply a great deal of professional discipline when dealing with the public. This means that I must overcome my true feelings about a matter and respond in a tactful and dispassionate manner, even if that means stepping away from a hotly contested issue for a time and writing about it later when my passion has abated. I have learned the hard way that to write scathing or threatening emails, articles with a lot of cuss words or flaming replies to those who disagree with me is highly unprofessional, and it’s also really stupid! If I act like an obnoxious idiot, then that will really distract and interfere with the real purpose for my writing, which is communicating my ideas.

To understand why I use a pen name, you would have to go back to where I lived in the past couple of decades. Some years ago I lived in a part of the country where sectarian prejudices could indeed make life difficult for me if it were known that I was a hard core occultist. I have always felt that it was prudent to mask myself with a pseudonym in order to safely present my beliefs and practices to the public. Even though I have moved away from that part of the country, the habit of using a pen name has continued. My author’s mask is not particularly opaque or very effective, since anyone who really wants to know who I am could find out on the internet without too much difficulty. I am continuing to use this pen name to establish some boundaries within my life, and not out of misplaced fear, and I am hoping that my readers understand this point.

Does that mean that I am a fraud or somehow duplicitous? Actually, no! What I say in my books is true, as far as I know, and much of it is based on my own real experiences. My biographical pieces do indeed reveal my actual history, but mainly through a tightly focused occult lens. My mundane life and its various happenings haven’t been fully revealed in any of my articles or writings. There is still quite a bit about me that is kept private and locked away in my heart and soul. That part of me is the real me, and it powerfully affects who I am and how I act towards others; but it’s not the part of me that I reveal when I am writing as Frater Barrabbas.

For instance, I certainly wouldn’t talk very much about my love life unless it had a bearing on the topic at hand, and then it would be made into more of an interesting story, colored by my occult proclivities and esoteric understandings. I am writing to present my ideas, thoughts and reflections, and at times I might take a few liberties with the actual facts to get those ideas communicated. I don’t lie or make up stuff; I just don’t tell the whole story, or I might even embellish a fact or two. I also omit things that I consider to be too personal and too revealing about the real me. I am sure that you can find those omissions, especially when I briefly mention something and then go on without explaining it much. The details of my mundane life are really no one’s business but my own, so I do have boundaries that I seek to maintain.

Additionally, my persona, called Frater Barrabbas, has a certain personality that doesn’t really represent me in a clear light. Frater Barrabbas is all about the glamor of occultism and ritual magick, and not much else. That really isn’t who I am, since I have a life style, a career and an important relationship that I am often engaged with. If you read too deeply into the Frater Barrabbas persona you would think that all I do is work or study magick nearly 100% of the time. A misconstrued impression is that Frater Barrabbas is an unrelenting, self absorbed, occult fanatic. He has shown a tendency to be arrogant, impatient, judgmental, overly intellectual, too confident of his “truthiness” and even sometimes a bit of a prick (according to my girl friend). That isn’t the real me, since I am often scratching my head about something that I am trying to figure out, or failing to adequately judge people or situations. I have a somewhat weaker personality with less intense opinions than how my persona is presented. I have doubts, fears and worries - pretty much like most everyone else. I am not insane (certainly) or delusional, and sometimes I revel in not thinking about anything serious or philosophical at all. Sometimes I just enjoy having some mindless fun. That’s the real me behind the occult author facade, but of course, there’s a lot more, too.

So if I say as a reminder to everyone that I am not Frater Barrabbas, then you might understand that I am just stepping away briefly from my author’s mask to speak to you as a real person. It won’t happen often, but at least you have been advised about this little fact. I am hoping that by writing this article that I might be able to stop some folks from sending me outrageous requests that I could never accomplish. I don’t know the winning lottery number (if I did, I would use it myself), I can’t levitate or cause others to fly, and I am not a miracle worker. As I have previously stated, my purpose for writing is to help people learn to use their own magickal powers. Even so, magick is really a human phenomenon. It can bend probabilities, but it rarely causes miracles. Since I am writing through an author’s persona to help teach others what I know, it doesn’t mean that I am all knowing or all powerful. Far from it! I am just a human being with certain particular virtues and flaws. If you send me an outrageous email request or come up and ask me to perform miracles for you, then I will have to back off and politely say to you, “I am sorry, but I am not that Frater Barrabbas!”
Frater Barrabbas
Posted by Frater.Barrabbas at 9:21 AM