King of the Cats 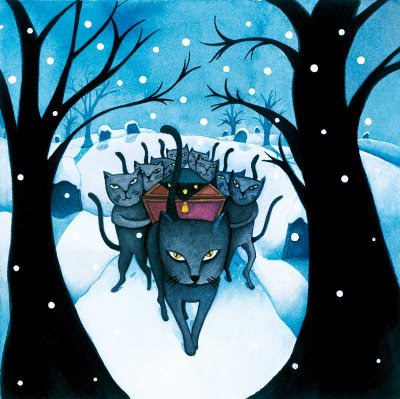 “Cats remind me of a true story,” he said to the mesmerized boys, speaking as if he were merely yarning, as if nothing but entertainment were on his mind. “It’s an old story, but the truest stories are very often the oldest ones. This was told by Sir Walter Scott to Washington Irving, and by Monk Lewis to the poet Shelly – and to me by a friend of mine who actually saw it happen.

“A traveler, in other words, my friend, was journeying on foot to the house of a companion – not me – where he was going to spend the night. He had been walking all day, and even though it was already late and night was coming on, he was tired enough to rest his feet when he came to a ruined abbey. He sat down, took off his boots, leaned against an iron fence, and began to rub his feet. An odd series of noise made him turn around and peer through the bars of the fence.

“Down below him, on the grassy floor of the old abbey, he saw a procession of cats. They were formed into two long equal lines, and were marching forward very slowly. Now, of course he had never seen anything like that before, and bent forward to look more closely. It was then that he saw that the cats at the head of the procession were carrying a little coffin on their backs, and were making for, were slowly approaching, a small open grave. When my friend had seen the grave, he looked horrified back at the coffin borne by the lead cats, and noticed that on it sat a crown. As he watched, the lead cats began to lower the coffin into the grave.

“He had scarcely finished when his friend’s cat, which had been dozing in front of the fire, leaped up and cried, ‘Then I am the King of the Cats!’ and disappeared in a flash up the chimney. It happened, my friend – yes, it happened, my charming little birds.”

One of my favorite fictional stories is the novel Shadowland, written by Peter Straub. It’s a story about magick, magicians, youthful regret, the loss of innocence, and the battle of good against evil. Except for the description of the supposed magickal abilities involved, which regrettably are based on the levels of magic as found in DND, the rest of the book is quite a fascinating read, especially for someone who is really seeking to master ritual magick. The most fascinating story in the whole book, oddly, is one about the King of the Cats, which I have purloined above for your enjoyment and discernment.

Mr. Straub has admitted that his main source of inspiration for his novel is the book written by John Fowles (1966), called “The Magus,” and I did notice, when I first read Shadowland, the ghost of that other story lurking behind the scenes. Both stories are highly recommended fictional reading, in my humble opinion. If you haven’t read them, then I would advise you to do so sometime in the future. I believe firmly that the student of magick and the occult should read both non-fiction and fiction in order to get a complete picture of the mythic reality of the domain of Spirit, and its intersection with ritual or ceremonial magick. Often, fiction reflects the content of what is popularly believed in a culture or sub-culture, and this is excellent fodder for occult creativity and speculation.

So you might be asking yourself why I have quoted a short passage from Mr. Straub’s book, and what does the art of ritual magick have to do with the King of the Cats? That’s a good question, and one that I intend on answering in this article. It would seem that the story presents an obvious morality play, where an aging amoral antagonist fights against a young idealist protagonist. The fight is where an older adult, who is the master of his domain, fights a losing battle against a boy who has just emerged into manhood. The battle is infused with illusion, deception, delusion and the hubris of old age; but the prize that they fight for is the domain of sorcery itself, which Mr. Straub calls Shadowland. He who is the master of Shadowland is the rightful heir to the jeweled Owl Throne, and receives the title of King of the Cats. For this story, the greatest master of magick is the reputed king of all other sorcerers, and he must rule with a certain cruelty in order to keep his high station.

The antagonist in this story is a man named Coleman Collins, a retired stage magician and master occultist, who through remorseless aggrandizement and the corrupt use of his godlike powers has acquired for himself a beautiful secluded country estate on a private lake in Vermont, and vanquished all of his enemies. Unwittingly matched against this rather powerful and evil magician is the innocent youth named Tom Flannigan, who discovers his own godlike powers as he tries to defend himself against the older man. Tom is the friend of Coleman’s nephew, Del, and is enticed to visit the secluded estate of Del’s uncle because in meeting and befriending him at the private school they both attend, Tom feels the instinctual need to protect and be a true friend to him.

Of course, nothing is at it seems, and there are many layers to the unfolding adventure. This is also not a children’s tale, since it involves the dark forces that lie at the very depth of human depravity and debasement. I could easily see Anthony Hopkins playing the part of Coleman Collins, since he has that innate ability to play the dual character of the menacing and evil sorcerer disguised by the charming elderly retired stage magician.

Coleman has murdered his way to the vaunted Owl Throne, and now as an old man, he seeks to keep his place despite the fact that his time is passed and a new powerful sorcerer has come to take his place. Only death can resolve this competition, and so the stakes are very high indeed. When Tom wins this contest by default, he becomes himself the King of the Cats. Yet Shadowland is irreparably changed, and Tom enters into the world as a man scarred by terrible circumstances, and he lives a life that is desultory and low key as a hapless stage magician playing shabby clubs. Yet as I said, not everything is as it seems, and even the under achieving magician hides a deep and terrible secret, about powers and domains that few can either see or understand.

So once again, what does all of this have to do with magicians and sorcerers in the real world? Why is this tale so compelling to me (and I might add, to many others)? Magicians are mostly dull characters scratching a living like everyone else, but also having to feed their ever hungering monomania for mysteries and hidden or occult knowledge. They may jostle each other from time to time, and perhaps even annoy the shit out of their fellow magicians, but it is all unglamorous and perhaps even a bit petty - so unlike the story.
We are all like the cats in the real world, each taking its turn at being the alpha cat, but always being turned out by some other cat with a more frightening meow or a more menacing and hissing puff-ball facade. I have to say that as the owner (if such I could be called) of four cats, I have gotten quite a bit of exposure to how cats work out their boundaries and establish supremacy amongst each other. When I read this story I had imagined that there was a kind of hierarchy amongst magicians, and that perhaps one of them was the King, or King of the Cats. I had thought that if I became good enough at my studies and adept at my magickal work that I would be brought into this hierarchy, but alas, all I have found after these many years is a kind of chaotic one upmanship where anyone can claim supremacy, but it is never taken seriously by anyone else. We are more like a bunch of overly fed house cats in a very large mansion - everyone gets to pretend that they are dominant without having to really prove it.

Morgan Drake Eckstein calls his house cats the Secret Chiefs, but that would represent a more democratic kind of polity, which would be a meritocracy that no cat would ever tolerate. In observing and even talking to my own cats, I have found that they are much more inclined to royalty and feudal fiefdoms, ruling by guile and fanged fiat as long as they can, which usually isn’t very long. You can always find another cat who will claim to be dominate and challenge the status quo, which is always changing and in flux. Perhaps magicians and sorcerers are more like real cats, seeking dominance, but always finding themselves ultimately in an inferior place due to the cleverness or craftiness of some other feline practitioner.

As I think about this trope, I feel a brief tinge of sadness and bitter remorse. How wonderful it would have been to eventually be able to sit on the jeweled Owl Throne and tell the world: “Now I am the King of Cats!”
Frater Barrabbas 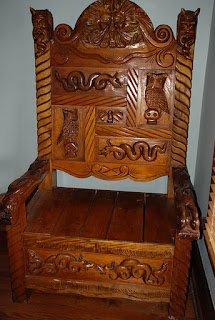 Posted by Frater.Barrabbas at 8:00 AM