Thoughts About the Real Hogwarts 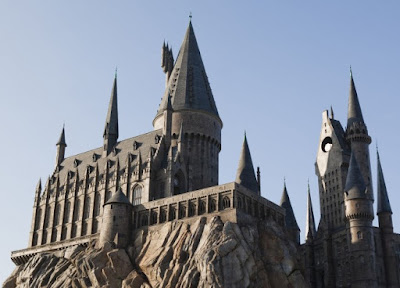 A lot of people who love the Harry Potter stories and have read the books (maybe even more than once) have taken some of the obvious fictional concepts of magick found in them as truly representing the methods whereby one becomes proficient in the art of ritual or ceremonial magick. Of course, these books are completely within the literary domain of fiction, and the author has maintained she didn’t incorporate any real occult lore into the stories. Anyone who is a real practitioner of magick and who has even a passing knowledge of the stories would agree with Ms. Rowling’s opinion. Real magick isn’t at all like what is practiced in the stories, but some folk, especially a lot of kids, seem to think that it is. Others have capitalized on this misconception, yet the best of them offer a compelling variation on the themes that Rowling has created in her books. I am, of course, referring to Oberon Ravenheart’s “Grey School of Wizardry,” which I believe is an excellent bridge between the fantasy of Rowling’s Hogwarts and real pagan occultism. You can find a link to Oberon’s website here.

However, as a fan of Rowling’s books (yes, there is a child-like side to me, too), I have often thought of what a school of magick would be like if I ran it. You could imagine that it would be called something like Frater Barrabbas’ School of Pagan Magick, or maybe the “Pansophic Academy for the Dilettante Dark Arts.” How about the “Occult Guild for the Ultra-self-absorbed?”  Anyway, I would like to present the kind of occult curriculum that I think would be important and useful for someone to begin the road of mastering the art of ritual magick. Gee, what a catchy phrase - it would make a good book title, yes? Oops - it already is a book title, and in fact, it’s one of my own. Sorry about that - just another senior moment of mine. Let’s continue with the article at hand.

So what would I propose to teach in a school dedicated to the kind of ritual magick that I practice? That’s a good question, and even if I never get around to actually building a school with a regimen of occult course work, going over a curriculum would at least give my readers an idea of which topics I consider important, and which ones I don’t think are important. Anyone who has studied for a time is going to have their own list of topics, but since this my blog, we shall momentarily allow me to indulge myself. What would the Barrabbas Tiresius School of Magick curriculum be like.

I won’t bother putting together a four year curriculum where students would be spoon fed their subjects over a period of time. Instead, I will assemble a group of topics that I consider to be crucial for an aspiring magician. I will let each individual take as much time as they need to master each topical area, but I will emphasize that some degree of mastery is important. Anything less would lead to possible problems later on, either in the area of confusion or personal delusion. Anyways, here goes - let me know what you think of this curriculum.

1. Divination - Perhaps the most important mechanism for occult self discipline is the mastery of divination. In the Harry Potter books, divination is considered the least important of the classes that a witch or wizard should take. Yet, in my personal experience, it is likely the most important topic that anyone aspiring to be proficient at ritual magick could possibly learn. The reason why this is true can be simply stated: “A magician who is unable to work any form of divination is effectively blind and insensitive about the greater mechanics of the Spirit World.” Not only does divination open a window into the Spirit World, but it also facilitates a sensitivity to paranormal phenomena and helps one to understand the symbolic language used in that domain.

Elements and aspects of the Spirit World are revealed in a rational manner through divination, and it also allows the magician to understand his or her world, fate and personal destiny. Without these tools a magician can only guess at what is required or needed for a successful operation or how to work on a specific problem and be capable of successfully resolving it. If the occult were so opaque (cut and dried) that divination wasn’t needed, then it wouldn’t be called the “occult,” now would it? The Spirit world is very oblique and inexplicable, so it expresses itself only through symbols and allegories. Not knowing the language of occult symbols and allegories and trying to function as an occultist is like attempting to communicate in Italian without knowing any of that language. Learning divination teaches the aspirant to understand the symbols and allegories through which the Spirit World communicates its mysteries. Competent ritual magicians should be fluent in several forms of divination, although they will likely be exemplary in only a few. Here’s a list of divination systems that a student should learn, and they are listed in the order of greatest importance first.


There are, of course, many more, but I think that these would represent the top ten.


2. Qabbalah - Yes, I know what some of you are thinking - why the Qabbalah? Well, as a meta-system for all religious and occult systems, I think that a working knowledge of the Qabbalah is very important. Since most occult systems refer to the Qabbalah, knowing it would seem to fill in a lot of blanks that would otherwise remain unfilled if one were ignorant of the Qabbalah. Also, if we consider that working any kind of magick is greatly enhanced by a competent ability with the Qabbalah, then it could only greatly aid the erstwhile student to master it.

3. Pagan theology and liturgy - This is where religious practices and magick coincide, and for the type of magick that I work, it is a very important intersection. Liturgical rites would include all forms of rituals and workings that involve spiritual alignment. Pagan liturgy would include the rites of devotion, spiritual service, godhead invocation, communion, charging and blessing, and the most important, godhead assumption. Such rituals require an in-depth knowledge of theology, choosing a pantheon, knowing the myths, stories and songs, the proper offerings and methods of devotion and service, as well the calendric rites and celebrations in order to produce the final product of such a regimen of study, and that is a spiritual discipline (to augment the magickal discipline). In addition to the above, training in meditative postures, temple dance and movement, meditation, contemplation, visualization, trance work and body work, grounding and centering would also be important areas of mastery.

4. Magickal Theory and Practice - Learning the theories and mechanisms of the three basic models of ritual magick: Energy, Spirit and Psychology. Of course, there are specific methodologies and techniques that are strictly within these three models, but most systems of magick incorporate all three. So the ultimate aim of any such training would be to identify the usefulness of all three models in a single system of magick. Learning to write good rituals and ceremonies for all occasions as well as the optimal methods of ritual performance would be the ultimate goal of this course.

5. Practical (Earth-based) Magick - Learning the most simple and basic techniques for making changes in the material world (through a mastery of the operant link). This methodology would include using different systems of divination and magick to chart a life-based strategy, both for short term gain, and for long term material mastery. Also included in this instruction would be learning how to acquire and manage information, to be able to effectively research and discover strategic data, especially inside or intuitive based information, and using it to develop a larger perspective useful for charting one’s life-path. Another important topic would be to learning how manage one’s finances and to create and follow a budgetary plan. (You would be surprised by how many occultists have problems with mundane money issues.)

So these are the seven areas that would be the main course curriculum for Frater Barrabbas’ Pagan School of Ritual Magick. I supposed that you could either emphasize one category or another, or even add additional ones that I have forgotten or omitted. The above categories would represent the list of things that I have at least dabbled in or even mastered in my many years of my magickal practice. Of course every magician would likely produce their own list, so I would like to request that if you can think of anything else that might be added, or perhaps put together your own list, please write up your thoughts in the comments section of this article. You might even write up your own blog article, too.
Frater Barrabbas
Posted by Frater.Barrabbas at 8:00 AM