Impressions of Taoism and the Tao Te Ching 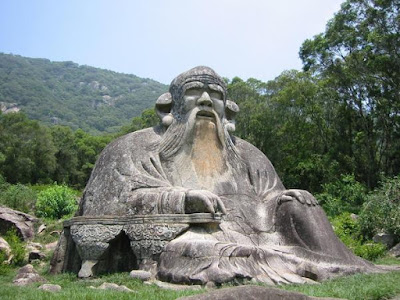 Of all of the Eastern systems of mysticism, the one that I find most akin to my own beliefs is Chinese Taoism. There is something natural, earthy and simplistic about Taoism, and also something that explains the mysteries of life and magick in a concise and profound manner. Unfortunately, my source for Taoism isn’t some faraway monastery in China, or even Boulder Colorado. It’s from the Gia-Fu Feng translation of the “Tao Te Ching” that I have gained a personal connection with Taoism, and I see it as one of the ways of describing the very spiritual core of natural paganism and ritual magick.
I realize that Taoism would seem to be far removed from Western occultism and quite foreign to the practice of ritual magick, but I found that it speaks volumes to me about the very core of the universal spiritual essence in a manner that is superior to any other book that I have found. To me, the Tao Te Ching is a most splendid counterpoint to the hustle bustle and frantic activity of a modern life - or even a modern practice of paganism and magick. For some reason, the Tao Te Ching cuts through all pretensions, revealing to me (and others) the source of all being-ness and its silent, dark and mysterious pathway as it effortlessly threads itself throughout all Life and Spirit.

Unlike other spiritual movements, the actual author of the Tao Te Ching and his history is unknown. He is called Lao Tzu, the Ancient Teacher, but nothing is really known about him, where he was born and when he lived, who was his teacher or point of inspiration. How long did it take him to write this book, and what were his intentions for writing it? Lao Tzu’s name is obviously an honorific, since his real name has remained unknown. All of these questions are never satisfactorily answered, so the author, his mission and intentions are a mystery. All we have is the book itself.

To celebrant the fact that I am a closet Taoist, I would like to share some of my insights and my particular awe for one of the oldest books of earth-based intuitive wisdom. Even though this book is steeped in the Chinese mysticism of the 6th century BCE, it speaks to me in a timeless but modern and contemporary voice. I hear it clearly as if it were just recently written, and I feel its words presenting to me a reality that is at once infinitely complex and inherently simple. It is the nature of the Tao to be essential, unknowable and the mysterious path between extremes, following a course that perfectly balances the cosmic Yang (archetypal masculine) with the cosmic Yin (archetypal feminine). Perhaps the most profound chapter amongst the 81 chapters of the Tao Te Ching is found in chapter six, where we read that:

The Valley Spirit never dies;
It is the woman, primal mother.
Her gateway is the root of heaven and earth.
It is like a veil barely seen.
Use it; it will never fail.

I have interpreted this chapter as promoting a form of earth-based Goddess veneration, that it also presents to me a form of transformative magick and a kind of Tantric discipline. It has many levels of interpretation, and each time I read and meditate on it, the words grow and expand in my mind. I literally feel chills when I ponder this simple chapter of five lines, as if the words speak far more than my poor mind can grasp.

Yet the really exceptional chapter (and they are all exceptional) is the very first one, which I have memorized and periodically use in my meditations.

The Tao that can be told is not the eternal Tao.
The name that can be named is not the eternal name.
The nameless is the beginning of heaven and earth.
The named is the mother of ten thousand things.
Ever desireless, one can see the mystery.
Every desiring, one can see the manifestation.
These two spring from a common source but differ in name;
this appears as darkness.
Darkness within darkness.
The gate to all mystery.

The author of this chapter, like many of the following chapters, takes the point of one perspective, then looks at its opposite, rotating from Yin to Yang, and back again. This is done in a dispassionate manner, merely stating facts and observations without any judgement. The main concept is that the Tao, obliquely defined as the source or the way of nature, is inexplicable. It has no definition and no form - it’s like an uncarved block or a newborn child.

To name something is to give it form, and that in turn causes it to be no longer capable of being the Source of All. Yet there is no fault associated with this perspective, since it is important to perceive reality from both the perspective of being “desireless” and also “desiring,” or naming and also allowing something to be nameless. As long as we avoid attempting to classify and attribute qualities to things that are of the Spirit World or of Deity, and then attempting to not only explicitly define them, but to believe that our definition represents an absolute truth, we will not err. Mental models are useful, but they fail to truly capture the essence of anything - they are maps, but not the territory.

This brings to mind the concept of defining our gods, giving them qualities and a mythic context, and then believing that what we have derived is somehow the whole picture. What we name and define in regards to the domain of spirit does in fact become limited and detached from the true mystery of that world. When we engage in religious liturgies and give images to the aspects of our Deities, then we have pulled them away from the true reality of Spirit, which is inexplicable and completely unknowable to the rational intellect. What that means is that even as we make mental models and Deities with attributes and human likenesses, we need to leave a lot of room for variations and the unmistakable entry of mystery and spirit. This is because what we assume and believe is always far less than what the actual truth is in regards to the Spirit World. To name and identify something is important, but to believe that the name truly represents it is a falsehood. The true way of nature and spirit is beyond human conceptions and definitions, and if we can embrace that amazing insight, then we will be free to experience the mysteries whenever and wherever they might occur.

A few other chapters of the Tao Te Ching also help to make this point very clear.

Returning to the motion of the Tao.
Yielding is the way of the Tao.
The ten thousand things are born of being.
Being is born of not being. (chapter 40)

Less and less is done
Until non-action is achieved.
When nothing is done, nothing is left undone.

The world is ruled by letting things take their course.
It cannot be ruled by interfering. (chapter 48)

Empty yourself of everything.
Let the mind rest at peace.
The ten thousand things rise and fall while the Self watches their return.
They grow and flourish and then return to the source.
Returning to the source is stillness, which is the way of nature.
The way of nature is unchanging.
Knowing constancy is insight.
Not knowing constancy leads to disaster.
Knowing constancy, the mind is open.
With an open mind, you will be openhearted.
Being openhearted, you will act royally.
Being royal, you will attain to the divine.
Being divine, you will be one with the Tao.
Being at one with the Tao is eternal.
And although the body dies, the Tao will never pass away. (chapter 16)


I could go on and on, but there is little point in doing that. The simple quotes above all point to a profound natural wisdom of the earth and its ceaseless cycles. Instead, I should contemplate this wisdom and seek to find that place of power and peace within me, and ultimately, I may know the True Way of Nature, which can’t be written, spoken about, named or in any manner defined or identified. The true mysteries are inexplicable and all around us, if we can just shut off the ceaseless mental talk in our heads and really witness it for only just a moment.

As Lao Tzu has so eloquently put it - “Those who talk do not know, those who know, do not talk.” May I be embraced by the silence that is deafening and the emptiness that is full. May my head be emptied of non-essential beliefs and my heart be opened to all possibilities. I hope that you have found this meager introduction to Taoism to be useful and perhaps even seductively enticing. I will be occasionally presenting more ideas like this in my articles to counterbalance the heavy orientation to mental models and definitions.
Frater Barrabbas
Posted by Frater.Barrabbas at 8:00 AM