Thoughts About Using a Vault of the Adepti 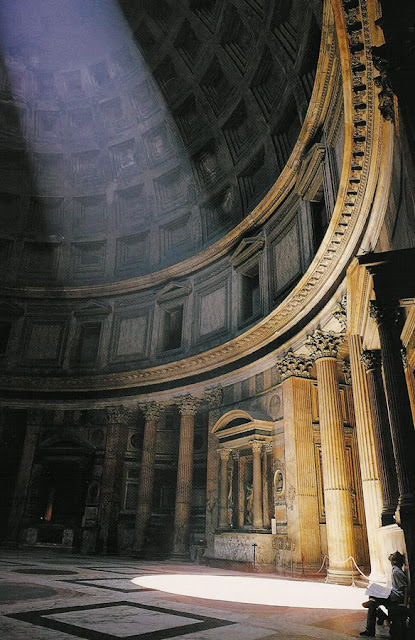 Now that we have succinctly reviewed the definition and nature of the Golden Dawn Vault of the Adepti, and we saw how such a container device could be re-defined using prismatic energy geometry within the tradition of ritual magick, the real question is - what do you do with it? Is such an elaborate structure merely nothing more than something to awe and inspire a candidate for the Inner Order? Besides the fact that in the Golden Dawn this chamber is used to propagate the mysteries of the second order through the guise of the tomb of Christian Rosenkruetz. It could also be a place where Enochian Chess could be performed or some form of skrying magic (analogous to Enochian Vision Magick); but the uninitiated public are pretty much left to scratch their heads, saying: “So much trouble and expense just for a collection of elaborate initiation rites?”

Yet since I have managed to replicate this ornate magical container into a complex ritual geometry, I can now see many uses for this tool. I will spend a few paragraphs elaborating on this particular insight, keeping in mind that I am completely ignorant as to how the vault of the adepti is supposed to be used for magical purposes in the Golden Dawn.

How this magical container would be used in the Order of the Gnostic Star for magick and initiations is a completely different manner, and one that I do feel competent in stating here. Since the key number for this chamber device is seven, then it belongs to the provenance of the Hierophant of the second order, which is the seventh degree. While such a magical structure becomes part of the tasks and ordeal of the Hierophant, it can be used in the initiation rites for the fifth and sixth degrees, since these are to be performed by him or her for the benefit of the initiatory candidate. I would consider this use of the vault of the adepti to be optional, since it would add even more elaborate structures to an already intense initiation regimen. Still, for the Hierophant and his ordeal of mastering the Seven Planetary/Sephiroth Rays, building and using the prismatic geometry for the vault of the adepti is a critical task, or so I have come to realize.

I would name this newly discovered mystikon or chamber of the mysteries for the Hierophant and the 7th degree, the Vault of the Adepti of the Seven Rays. It’s theme would be associated with the mystical tomb of Hermes Thoth instead of Christian Rosenkruetz. In my opinion, these two personages are similar and analogous, but represent different time periods and mythic systems. I think that Hermes Thoth is more pagan and representative of the Hermetic system of magick, but that’s just my opinion. Also, these seven rays are not to be confused with the seven rays of Theosophy, since they are considered in the Order to be nothing more or less than a subset of the Ten Sephiroth. This is why I am associating them with the Sephiroth in my nomenclature to avoid any confusion.

Some years ago I had completed assembling all of the rites and ordeals of the Hierophant, and these were divided into two overall categories; those that are worked with the number seven (as in the Seven Rays), and those that are worked with the number eleven (as in the sacred seven matrons and four patrons). I won't go into any detail about these two ordeals at this time, but the foundation of the ordeal of the Seven Sephiroth Rays was a rite called the Ritual of the Seven Rayed Star. What I realized after discovering that I could simulate the vault of the adepti using prismatic energy geometry is that it was a better and more complete foundation than what I had previously determined. I would need to insert this new ritual (when I get around to writing it) into the regimen of rituals used for the ordeal of the Seven Sephiroth Rays. It will make that ordeal more complicated, but it will also make it far more powerful. The newly formulated Vault of the Adepti of the Seven Rays can also be performed alone and outside of the ordeal (once it’s mastered) to perform some very valuable forms of magick.

So the question is what kind of magick is this vault of the adepti to be used by the fully vetted Hierophant of the Order of the Gnostic Star? First of all, considering the number of elements packed into the ritual structure (40 x 7 = 280) and that it incorporates the Qabalah, Astrology and even a form of planetary alchemy, it represents the full spectrum of all symbols associated with the Seven Rays. It is, in fact, a kind of magical machine, which can be used to set any combination of symbols to produce some kind of magical effect. We can also consider that those symbols are also associated with numerous correspondences, including hierarchical lists of Godheads, angels, demons, earth spirits, and any number of other spiritual entities.

A magical machine exemplifies the magical concept of “Thought becomes form, and form becomes thought.” This concept is a hallmark of the Hermetic path itself (as we shall see below). The focus of a magical machine can be on the Inner Planes to acquire knowledge and insights, upon the self to effect a powerful form of self-transformation, and it can be focused on the material world to bend reality and make changes. It can be used actively to project magical power and it can be used passively, to perform divinatory operations. It is also a kind of mystical chamber where the themes of death, immutability and even regeneration are expressed.

In the case of the Golden Dawn vault of the adepti, the premier mythic personality is Christian Rosenkruetz; for modern pagans, that personality would be Hermes Thoth, Thrice Greatest. The tomb is also a place outside time and space, since within it, the body of the mythic personality is not necessarily considered dead, but only in a kind of deep sleep or stasis. Not only is the sleeping magus of great importance, but so is the knowledge contained within the vault itself. In the case of Hermes Thoth, that knowledge would be ensconced within the Emerald Tablets. The aphorism of “That which is above is like that which is below, and that which is below is like that which is above..” encapsulates the secret knowledge of the power and majesty of the magical machine. Through an application of its powers and capabilities, anything can be accomplished.

So learning how to deploy this very important ritual system into the body of the ritual ordeals of the Order is critically important. I am glad that I discovered this new piece associated with the Hierophant degree of the Order, but it does make me wonder what other pieces are missing from that which I have already determined and written up. Looking over the list of rituals associated with the Seven Rays, I had always felt that the overall structure was quite weak and incomplete. Since I didn’t have any additional insights as to how that ordeal should be strengthened, I didn’t give it much more thought. Now, several years later, I have determined another very important piece, and it does make that ordeal much more powerful and comprehensive.

One other thing that haunts me as I go through this ordeal of discovery, seemingly a constant and never ending process, is that I originally develop a series of rituals to perform for a given ordeal or to achieve a certain end, and then some years later discover that something was missing or incomplete in that work. This doesn't happen with every ordeal that I have developed, but it has happened often enough to make me a little worried about the permanence of my work. I have often wondered why this is so, but I do realize that all creative minds execute their creations in erratic waves, and later on when they discover new ways of doing things, that knowledge is often applied to that past work. Creative work is forever ongoing and doesn’t end (hopefully) until the artist finally sheds his or her mortal coil and ceases to work from that moment onward. Others might pick up the torch and pursue it, and over time, might even add more realizations and creative inspirations to the work. This is much more possible and realistic when considering such fluid endeavors as occultism in general, and specifically in the arenas of ritual and ceremonial magick.

It is my hope that others will invest themselves with the lore of the Order and perhaps keep it moving forward even after I have passed from this world. My only hope is that the lore that I leave behind has no glaring holes left in its array of ritual workings, and that the work moving forward is the invention of new ordeals and ritual workings instead of fixing what I failed to complete.