Vault of the Adepti 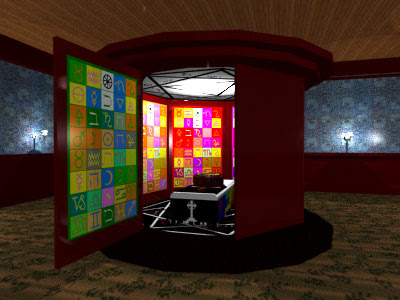 I think that one of the coolest things that the author of the second order of the Golden Dawn ever came up with was the vault of the adepti, which was a fabricated container of sorts filled with symbolic colors, designs, characters, sigils and furniture. This was obviously something that had the imprint of both Mathers and his wife, Moina, since it was a synthesis of art and occult symbology. If ever there was a potent justification for believing Mathers to be something of a creative genius, the vault of the adepti is one of many. Just the mere idea of sitting or standing in a large container set up within sacred space full of activated symbols and vibrating colors was quite a fabulous notion, perhaps one of the most influential in all of the second order GD lore.

Still, this was one of those fanciful devices that I never got to either see or touch, build in some manner or fully experience; but it was something that powerfully influenced my imagination even today. Even the name “vault of the adepti” sounded exotic and thrilling to me. One of my friends, who was also one of the co-founders of the Order of the Gnostic Star, used to talk about it as one of the highest attributes of the inner order of the Golden Dawn, and his spirited talk helped fuel my imagination. Yet because I never was able to find a Golden Dawn temple to join and thereby learn about this awesome and mysterious vault, it remains something of a side issue that I never really studied or mastered. To this day I am somewhat ignorant of the details of the vault regarding to how it’s supposed to be fabricated, consecrated and utilized in initiations and even in magick. It is also quite beyond my ability to even consider building such an elaborate work or magical edifice today.

A vault of the adepti is simplistically defined as a large septagonal prism shaped container ensconced within a temple room. It has seven walls (shaped into a septagon), and a floor and ceiling both with the contrasting design of a triangle within a septagram, where the ceiling is white and the floor is black. Each wall is approximately 8 feet high by 5 feet wide, and they are divided into 40 squares each, consisting of a colored symbol and a colored background set to a specific symbolic attribute and painted with flashing colors. Each of these 40 squares are associated with the symbols of the ten Sephiroth, twenty-two Pathways (12 zodiacal signs, 7 planets and 3 elements), the four Kerubim, the three Alchemical Principles and the One Eternal Spirit. All of these 40 squares are attributed to the specific planet associated with the wall, and this indicated through the incorporation of different hues of flashing colors, which produces a powerful rainbow effect as each wall contrasts with another. The door to the vault is located on the Venus wall, and once closed, the container presents a seamless depiction of the full range of planetary symbology arrayed in brilliant color.

Within the vault is a circular altar stand situated over a rectangular coffin shaped structure called the Pastos, which is large enough to allow a person to lie down comfortably within it. The Pastos has a white head and a black foot, painted with contrasting Rose/Calvary cross designs, and the center is painted with the colors of the rainbow, depicting (again) the seven planets. Outside of the vault and situated on either side of its door are the black and white temple pillars. The door opens to the western side of the outer temple and against the wall in that outer temple is the cross of obligation. A doorway that leads into the outer temple is situated between the western and northern walls (i.e., northwest corner). 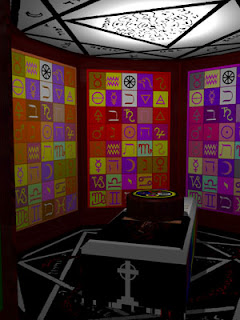 There are a lot of pictures and images of this spectacular ritual container, but it could ideally be a full sized room secretly annexed off of the main GD ceremonial temple, if one had unlimited resources. I won’t get into the specifics of this marvelous device, since anyone who is that curious can consult the volumes of the Golden Dawn lore that are published. (The specifics of the vault are supposed to be oath-bound, but that hasn’t stopped some from publishing information about it.)

Even so, the idea of crafting a vault was really beyond my abilities, and so it remained nothing more than a fanciful notion to me. I went on with the magical work, study and practices that I had started back in the early 80's, and what I was doing, however advanced, had little in common with the notions of a concentrated magical environment like a vault. Little did I realize that there is more than one way of either constructing or generating this kind of environment, and that the more elaborate ritual structures that I had developed would in fact simulate, in another manner, the power and majesty of a vault of the adepti.

When we consider that the prismatic energy structures established in an extended version of the energy model of magick can produce simple or complex geometric structures, then when those structures become complex and highly geometric, they can have a similar magical affect as a vault of the adepti. The key, of course, is being able to derive enough of an elaborate geometric construction using prismatic energy structures to simulate the basic elements of a classical Golden Dawn vault. The whole key, of course, are the seven planetary walls each with 40 symbols arrayed on them. How would an elaborate ritual structure incorporating a prismatic energy geometry replicate the array of symbolic structures found in a vault?

I have already discussed the more advanced sacred geometry regarding prismatic energy structures incorporated in ritual magick, and it might be useful for you to re-read what I posted many months ago. You can find that article here. The kind of ritual structure that I would incorporate to establish the outer perimeter of such a magical environment would be the twelve pointed magick circle, which produces an in-circle dodecagon, and this would function as the mystikon or chamber of the mysteries. I have taken a couple of paragraphs from that article to describe in greater detail what that structure would look like and how it would function.

“The twelve pointed magick circle can be used to establish an in-circle dodecagon, and the sixteen pointed magick circle could be used to establish an in-circle double octagon. To produce these structures, each of the points would have to be deliberately drawn together along the periphery of the magick circle. The only actual variances would be the vector used in joining the points together, whether clockwise or counter clockwise. In addition, whatever ritual structures were employed in the center of either a duodecagon or a double octagon would add to the over-all prismatic field, producing very elaborate structures.

A dodecagon with an internal combined structure of a pyramid, a tetrahedral gateway and a mid-point would produce a dodecahedron prismatic structure. That prismatic shape would emerge because the initial energy structure of a sphere would imprint and carry the design to both hemispheres of the magickal circle structure, even though, technically, only half of it would be visual. Such a prismatic energy shape, besides being one of the Platonic solids, would represent an elaborate and fully empowered mystikon or telesterion (chamber of the mysteries).”

An in-circle dodecagon would represent the twelve signs of the zodiac as well as establish the containment field for the chamber of mysteries, yet the overall structure would include other additional elements so that the key number of 40 would be satisfied. The twelve points would be determined by the four Watchtowers and the two in-between points on either side of the four Angles, thus leaving out the four Angles for other structures.

Excluding the meso-point (the place of mystery and union for all of the previous elements), the above five integrated structures have the following numeric elements - 12, 5, 8, 7, and 8 equals 40. Each of these forty elements would be associated with an overall planetary configuration, thus making the number of elements of this ritual structure equivalent with that of the vault of the adepti. I would also assume that the effect of erecting these ritual structures would produce a field that would be analogous to that of the vault. An enterprising magician could add to the ritual structures all of the verbalized myths associated with the burial vault of Christian Rosenkruetz (or something that would be spiritually analogous), and the simulacrum of the great vault would be symbolically represented. 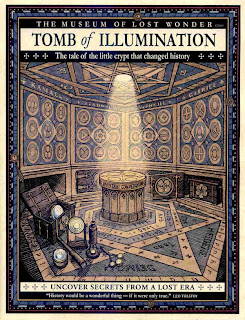 As you can see, there are a number of ways of doing something, and magicians don’t have to be stuck on just one way. While it is wonderful to be able to build and craft something that is based on the exact parameters of a tradition, it should not be a sticking point. As always, there are many ways to accomplish the same analogous thing using different magical models or theories. I hope that I have presented one of many variations for producing the wondrous vault of the adepti.