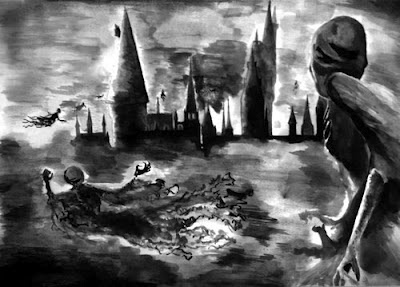 “For these beings, fall is ever the normal season, the only weather, there be no choice beyond. Where do they come from? The dust. Where do they go? The grave. Does blood stir their veins? No: the night wind. What ticks in their head? The worm. What speaks from their mouth? The toad. What sees from their eye? The snake. What hears with their ear? The abyss between the stars. They sift the human storm for souls, eat flesh of reason, fill tombs with sinners. They frenzy forth....Such are the autumn people.”

October comes, and the leaves accumulate on the ground, being blown in all directions by the mournful cold breezes of autumn. The leaves started changing and dying early this year, and now the trees are copiously shedding their leaves. When the sun weakly shines on the world, the colors of autumn blaze forth in a glory of golds, reds, browns and yellows. This is one of my most favorite times of the year, and oddly I feel more alive in autumn than in summer. This probably has to do with my greater cycle of fortune, which reaches its peak in the first week of January. Winter is coming, and nature prepares for it by receding into its core all of the bounteous indicators of life and living things - they disappear, only to reappear in late April. For us in these northern climes, winter is like a vigil, waiting through the cold and icy days for the first signs of spring and renewal.

Some people think of their own ultimate end and passage from this world, but others just recede into their homes, thinking and dreaming of future days amidst the warm and plenty of their autumn harvests. This year began with an innundation of rain and the water of life, but now the land is dry and withered as the dust and bones of forgotten graves. I am certain that some harvests were poor and there is little to celebrate in the season. Halloween is coming soon, and afterwards, Thanksgiving and then the Yule and Calends. As the clock for the year is rapidly ticking out its final hours of life, a new year is already beginning to take hold in the thoughts and dreams of many. It is also a season of presidential politics that is filled with hope, fear, loathing and vitriolic exchanges. The nation seems to be more polarized than ever before, and I can only hope that cool heads and steady hearts will guide the nation to making a good collective decision - even though I am always amazed at the total lack of critical thinking that appears to drive many people’s choices.

As far as my personal life goes, though, I am witnessing the changing season once again from the my home office window. The server re-hosting project that I have been working on since late Spring has continued to drag on into the autumn, but now quite a number of important mile-stones have been met and I can see the light at the end of the tunnel. This work project has been all-consuming, and I have not even had much time to spend on a social life, let alone on holidays or vacations enough to enjoy them. My allotment of life is getting incrementally shorter for me, but at least this project has allowed me to reinvent myself and get some important good exposure from the company executives. I have greatly exceeded expectations, but I shall see how this is rewarded and reckoned by them early next year. This is why I have not been writing very many articles over the last few months. I just don’t have a lot of excess time to work on my various writing projects.

“Magical Qabalah for Beginners,” which is a book project that is going to be published by Llewellyn Worldwide, has passed the first phase of editing and is now in the second phase as well as undergoing copy editing. My production editor has informed me that the manuscript layout is scheduled to be going to the printer on November 1, and copies of the book might become initially available by Yule. I haven’t seen the text for the back of the book, but I believe that will be sent to me for review in the very near future. I have already sent in some book blurbs kindly written up by some of my author friends, and parts of these will likely find themselves on the back cover. I am also going to be planning on having a couple of book signings after the middle of January, when the books become available to the public. Instead of just having a book signing, though, I am also planning on giving a short talk on the Qabalah at these venues as well. I think that giving something substantive to the public along with promoting my book will help to entice people to come to the signing, and perhaps even buy one of the books. (I’ll let you know in advance when these dates and places are firmly scheduled.)

Magically, I am planning on generating the final four-fold talismanic elemental of Mars in October, and I hope to realize all seven of these metallic talismans and how they will work together as an activated array. I have kept the previous two (Venus and Jupiter) under wraps since I created them in anticipation of acquiring all seven. I am really looking forward to completing this working and having all seven talismans to use in various magical operations. I will talk more about this in a future article, but it does lead me to some interesting topics. Other magical operations are still in the planning stages, and I am hoping that the deferred vacation time that I will get to take at the end of the year will be auspicious for performing some exploratory magical workings.

This leads me to the topic of this article, which is the Autumn People, as described by Ray Bradbury. I have been a fan of Bradbury’s work ever since I was an adolescent boy greedily cutting my literary teeth on many a science fiction tome. I loved his work because he so artfully mixed the genre of science fiction, fantasy and even threw in some philosophy. The whole concept of “Cougar and Dark’s Pandemonium Circus,” and being able to deal with death and dark wishes made the book “Something Wicked This Way Comes” one of my all time favorites. The movie that was made years after I read the book was very well done and represented Bradbury's literary style quite well. The movie of the same name starred Jason Robards as the elderly father figure, Charles, who sagely rescues his son and best friend from the evil wiles of Mr. Dark,

However, the concept of the Autumn People has always intrigued me, since it would seem that they would represent the forces of death and decay that refuse to die, and instead feed upon the frustrated dreams and self-denial of those who lives have reached an end-pass. Since I have always been something of an optimist, I have found myself confounded by the pessimists who seem to delight in the diminishment and collapse of everything that I cherish and enjoy. They are the people who snuff out happiness or joy with a word or a look, and seem to feed on misery, despair and misfortune. These people are subtle psychic vampires who get drunk drinking off the happiness and exaltation of other people, but never contributing any joy themselves. We have all met these people at some point in our lives, and how we deal with them is important for preserving our internal integrity and dignity for the duration of our lives. Death comes to everyone, at some time or another, and it is unavoidable. But there is little point in living a life that is for extent and purposes, already dead.

Yet while we live, as pagans and witches, we must live life to its fullest joy and ecstasy, or we haven’t really lived at all. We must also resist those who would take away our joy and ecstasy, removing the color and maddening wondrous diversity from life and leaving behind a grey monotone world of sameness. Indeed, we need to banish the autumn people from our lives and keep them from preying on the unsuspecting world. The planet has more than its share of misery, tragedy, calamity and catastrophe, so we must preserve those beautiful moments of brilliant sunshine, joy and happiness. They are moments of summer in our lives, and they represent the most precious core of what life is all about and why it is worth living despite everything. Summer is all too brief, so we must rejoice in it when it arrives, and remember it well when the time of autumn comes with its harkening of winter’s dismal embrace.

(Note: Sometimes I almost believe that the Republican party has become filled with autumn people who translate good news into bad, make an economic  recovery into a steadfast decline, and whose only objective is the grasping and wielding of power for the elite few while robbing everyone else of what little joy there is in life. I hope they lose the election badly in November, as if to tell truth to their lies that the future is without hope unless we bow to their immanent ascendency. Maybe they will pass away like a bad dream or the blowing away of dead leaves, allowing the rest of us to actually make some progress in dealing with the many problems that this country continues to face.)