Autumn Calends and Other Musings 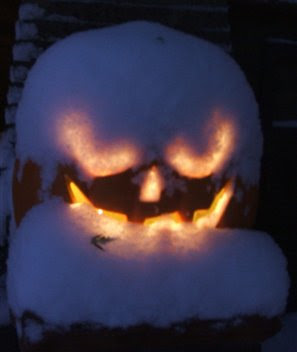 Warm autumn days that made the scarlet and golden colors of falling leaves such a fantastic vista of warmth and earthiness are already past. Yesterday, we had our first snow fall, and although it didn’t stick to the ground, it is sign that winter is nigh at hand, once again. I had one day to take care of the yard and the grove, and it was so balmy that I almost took my shirt off. Now, the nights are freezing cold and it has been raining and sleeting the last couple of days. I have to believe that we are now entering into the narrow corridor that leads from autumn to winter, and it begins with what I call the autumn calends.

Highlighting this narrow boundary between autumn and winter is the celebration of Samhain, or Halloween, as it is popularly known. This has always been my favorite time of the year, although up here in the northern Midwest it can be quite cold and even frigid. Long time residents have regaled me with stories of snow-covered Halloween nights, so I have those legends to give me a sober reflection on living so far north that it can snow on Halloween. Still, there was so much that I wanted to do during the warm months and most of it had to be deferred. Hopefully, such impositions will not occur during the next year.

The massive project that I have been slaving away for my mundane job has finally come to an end, although I didn’t install the last few pieces until nearly the middle of this week. These last couple of days I have been on a forced vacation - my boss told me to take some well earned time off. As of Wednesday, I had just completed every task on my working list, which was a list that seemed at times never to dwindle much and had new tasks constantly assigned to it. Then, before I knew it, I just finished the last set of scripting work and the pause nearly took my breath away.

You can't imagine how difficult it is taking an old antiquated data warehouse system and porting onto a completely new environment, including a new O/S and storage foundation. The old server was split into new application and database servers, but the old application software, most of which is already way out of date, was moved into the new environment instead of being upgraded and rebuilt. Needless to say, I got everything to work just as it does on the old server environment - a feat not be lightly scoffed at.

It had been six months of constant work, including weekends. I am glad that I will finally get my life back and be able to have a social life and all that entails. It seems like it's been a very long period where I was stuck at my desk looking wistfully at the world outside my window. I blew the whole summer working and I didn't get to enjoy very much of it, but now, at least I will be able to enjoy the end of autumn. So, the autumn calends is becoming for me a time when I will actually resurface and become, as it were, socially reborn. I also have around three weeks in December to look forward to, enjoying a long period of paid vacation and relaxation. It has been well earned, and I have to take it or lose it in the coming year. The holidays will be quite enjoyable this year, even though the days and nights will be cold and seemingly lifeless outside.

Autumn calends also means politics, particularly during the four year presidential election cycle. I have been something of a political junky reading over the various election poles when time has permitted me to do so. While it might be possible for Mitt Romney to be elected president of the U.S., it seems rather remote when examining the battle-ground states’ poles. I am hoping that Obama gets reelected, since although he is not a great president in my estimation, he is at least a good president. I can trust that he will do mostly as he says he will do, even though I might disagree with some of his decisions. There is something comforting about knowing that a politician has some foundational principles that drive him or her. I don’t feel that way about Mitt Romney at all, and in fact, I see him as a rich arrogant plutocrat opportunist who will say just about anything or take all sides of a policy argument to get elected. He pretended to be severely conservative during the primaries, and now he is pretending to be a moderate.

However, such a weak and unprincipled man would likely do as his party directs him to do, and their positions are starkly ultra-conservative. I just don’t trust him and I loath everything that he stands for, so there is no mystery about whom I will be voting for on November 6th. I hope that Obama manages to put his opposition down hard so that I don’t ever again have to hear Mitt Romney’s outrageous lies or see his simpering and condescending smiles. That would be a pleasant Solstice present indeed! I am reminded of what “Humble Bellows” in the 50's movie “The Crimson Pirate” said to his captain, whom he had just “sold” to the authorities for a barrel of rum: “And there’ll be no more of thee and thy pirate capers.” One can only hope for such a happy outcome.

My forthcoming book (Magical Qabalah for Beginners) is proceeding through the final editing phases, having gone through the production editor, copy editor, and now a second and final copy editor. As I have said previously, the manuscript layout is scheduled to be sent to the printers later next week. I have had the pleasure of looking over that layout in a PDF file, and I have seen all of the diagrams, tables and illustrations that the staff artist at Llewellyn has produced for this book. The editing has made my wordy and somewhat cumbersome prose into a very readable and accessible text, so I am looking forward to finally seeing this work in printed form. The book is being sold at a modest price ($15.99) and I believe that I have at least produced what I consider to be a potential classic amongst the books written about the Qabalah. We shall see if the public at large agrees with my assessment. While it is a book written for beginners, there is enough new material to make it worthwhile for a more advanced student to purchase it. I might be able to actually see my first imprint perhaps as early as December, but the scheduled release date is mid January, 2013. You can find a link for this book on the Llewellyn Worldwide website here.

During the working that I performed last night, I experienced a fair amount of resistance to completing this working. I felt a certain amount of lethargy and inertia dragging me down, and I had to overcome these feelings and sentiments in order to do the work. The ritual work seemed to weigh me down, and going through it was, at least initially, uninspiring and plodding. I had put off the magical Mass until the last day, so I had to perform an abbreviated version of that rite in order to properly consecrate the talisman and associated sigils before invoking the planetary intelligence and associated Enochian seniors. I stumbled through that rite and managed to complete everything, although it all seemed to be taking a long time to complete.

The actual invocation of the Olympian Spirit and subsequent Talismanic Elements seemed oddly arduous and difficult. I had to increase my resonant bodily energy and focus my will to get through this rite, as if the resistance to doing it would stop me in my tracks if I succumbed . I drew upon all of my resources and set my will to complete this working, even though the ritual execution was uneven and rough in a few places. I was amazed at these occurrences, since I have performed this working at least six other times in the last several months.

Still, I persevered and managed to get through it, but afterwards I felt completely exhausted by the ordeal. I may have started the working at 9:45 pm to lock in the hour of Jupiter, and then completed the working around 11:10, but it seemed like I had been working magic for hours. I found this whole process to be strange and remarkable, but I guess that Mars had one last hoop for me to jump through, and it was merely by the power of my will and my magical discipline that I managed to push the whole process to a successful completion. Whew! I am glad that I managed to complete this working, and I am surprised at the resistance that I encountered. All of these difficulties that I experienced could be considered as being related to Mars, and what I needed to complete was also very much in the domain of that planet.

My future plans for using all seven of these metallic planetary talismans is to perform a ritual known in the Order as the Septagramic Vortex Gate ritual, and to use each of these talismans to empower the seven points of this rite. I will then endeavor to incorporate them and this rite into another working for the talismanic Portae Lucis for the Winter Solstice. Even though Jean Dubius has stated that this rite is best performed when the light is at its greatest amplitude, as it is during the Summer Solstice, I have decided to try it during the Winter Solstice.

Since I have already performed this working for the previous Summer Solstice, I believe that it will continue to echo and reverberate for the following Winter and future Summer Solstices as well. I was told as much at the climax of that working in June, and although the light will be at its lowest point in December, it may also allow an opening and a gateway to greater spiritual realization. This is how I had interpreted what I was told during the last working of the Portae Lucis, so I will attempt to experience the opposite polarity, the Portae Tenebrae, or Gate of Darkness. Where the gate of light emanated its blessings and grace to me in the Summer, the gate of darkness will beckon me to enter into that spiritual domain of Saturn as Binah. I am looking forward to experiencing that just around the Winter Solstice.

Autumn is a time when I organize my research and study regimen and plan on acquiring new materials for future book projects. I am already engaged with this work, and I hope to share some of the things that I am learning as I go through this process. There’s too much to relate here at this time, but in the coming months, I hope to put some of my ideas and insights into articles that I can post on my blog. There are quite a few new topics that are crowding my to-do list, so you can expect some very interesting and in-depth articles to be posted in the next six months or so. Once we get snowed in up here, then folks tend to retreat indoors, and winter is usually a time when I think and reflect about the past. And there is much to think and reflect about this winter.

Happy Samhain, Halloween, and All Souls Day - be safe and enjoy the Calends of Autumn!