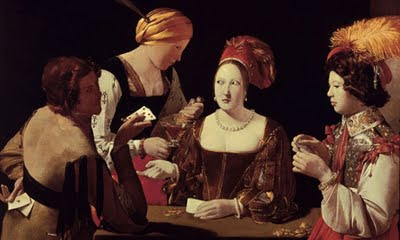 I had presented, along with my article on the provenance of medieval emblems in the Tarot trumps, some of my thoughts about the history of the Tarot. Unfortunately, those historical comments were actually quite inaccurate, a point well made by a commentator who has the moniker of “robjo.” Due to his excellent comment, and the fact that my historical notations were completely wrong, I felt it important to more carefully research the history of the Tarot, and this time, get it right. I found most of my answers in Wikipedia, and they appeared to be correct, you can find that web page here.

What I found is that the Tarot was not the first card game that appeared in Europe in the 14th century. In fact the Tarot was developed a century later in Italy, and the base card system that it was built upon was the simple 52 cards that we know today. The original game appeared first in China during the Tang dynasty, although it was quite varied and different than what is used today. India also had its own version, using round cards and many suits, but the Arab Mamlukes used a system that was very similar to the later European playing cards.

In the Mamluke deck there were 52 cards consisting of four suits and twelve court cards (malik - king, na’ib-malik - viceroy, thani-na’ib - assistant viceroy). These three personages later became the face cards of the King, Queen and Jack or Nave. Since Arab law forbade any kind of human likeness to be depicted, all of the cards consisted of geometric designs. The numbered cards (Ace through Ten) had the suit emblems depicted in geometric arrangements, and these cards were called the spot or pip cards. The four suits were staves, swords, cups and coins, which is how they were depicted when introduced to Europe, probably around the late 1370's. Early card sets were hand painted, but cheaper wood block printed versions began to appear in the 1420's. The four suits used most widely today first appeared in France in around 1480, being the images for clubs, hearts, spades and diamonds.

Whether we are talking about playing cards, or Tarot cards, they were all used specifically for gaming. While it is possible that cartomancy may have appeared when card sets became more common, the use of the Tarot for divination didn’t become widely accepted until the late 18th century. Afterwards, the Tarot diverged to become an occult instrument used in cartomancy, and common playing cards continued to be used for gaming, although some continued to use the Tarot for gaming up to the present time. Of course, some individuals, like Gypsy fortune tellers, used the common playing deck for divination, too.

Anyway, the Tarot was invented in Italy sometime during the 15th century, perhaps as early as the 1420's. However, the Tarot had an additional court card (the knight), and twenty-one Trump cards along with the Fool card, thus producing a deck of 78 cards. While the Fool card might be confused with the Joker card, the Joker didn’t appear in the standard 52 card deck until the 19th century, and was actually an American innovation. The Joker was used as a third trump card in the game Euchre, and was probably introduced around 1870.

The rest of what I said in my article was correct and accurate, except that the common 52 card set of playing cards came about long before the invention of the Tarot, and the Joker card was a recent invention. In the late 19th century, the twenty-two Tarot trumps were allocated to the twenty-two paths of Tree of Life, elevating them to a higher symbolic characterization than what they had ever achieved previously. What this whole process represents to me is that things that have a common origin and use can become sacred exemplars in a later age. Perhaps there is even hope for myself to someday become a kind of magickal saint (but I doubt it).
Frater Barrabbas
Posted by Frater.Barrabbas at 8:00 AM