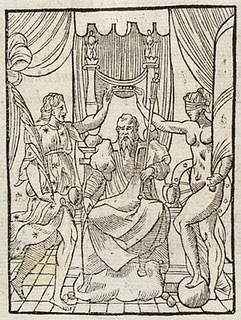 I have previously discussed how other alphabetic systems, which have more than 22 letters, could be accommodated by an expanded Tree of Life glyph and a Tarot deck with more than 22 Trumps. How one might go about adding additional trumps to the Tarot would be a fairly difficult operation if weren’t for the wonderful set of tables and commentaries provided by Stephen Skinner’s book “The Complete Magicians Tables.” According to Mr. Skinner, the various themes for the 22 trump cards of the Tarot were obviously taken from teaching emblems as originally derived in the middle ages.

Since literacy was something of a novelty (perhaps even to be equated with supposed magical abilities), much of the world functioned through the use of emblems, often painted on wooden signs or walls. These signs would denote the characteristics and services of various merchants, public houses, inns, and other social gathering places. Pictures brightly painted on signs placed in front of various cottages and buildings indicated what was being offered within to those who might not be intimately familiar with the local neighborhood. Emblems were used to indicate many things to a populace that was largely unlettered, and this also extended to the teaching of Christian theology and related concepts. We have in our art museums, special collections and universities many examples of these kind of teaching emblems, and in fact, there is an entire sub-genre of Italian and European art to facilitate the study and examination of these various paintings. Some of the earliest Tarot decks seemed to have made use of a variable number of these emblems, dressed up as the Tarot trumps, and they appeared to be related to at least six distinct emblem categories, although there may have been even more.

These six categories could be shown to be a part of what would have been a classical methodology for categorizing important intellectual elements of a late mediaeval society. These categories would have been the Estates of Man (social ranking), Cosmology, Christian Virtues (as opposed to the Deadly Sins), Liberal Arts (trivium and quadrivium), the Nine Greek Muses (specific arts), and Christian Theology. Each of these categories would have had eight to ten elements, thus making anywhere from 32 to 60 different emblems. Mr. Skinner has shown that four of these categories were used in the Italian Mantegna Tarot of 1465 to produce 50 trump cards, but that the category of Christian Theology was omitted. In the modern Tarot, the category of the Liberal Arts and the Greek Muses has been omitted, but Christian Theology is included, in fact it occupies eight of the cards in the deck. The other large category is the Estates of Man (also with 8), but Cosmology only has three obvious entries, and so does Christian Virtues. Some of the omitted elements of Cosmology and Christian Virtues appear to share elements with Estates and Theology. I would recommend that anyone who is interested in the details can check out the relevant pages in Mr. Skinner’s book (Tables T34 - T37 - p. 276, and the commentary found on pages 415 - 419).

For instance, if we are to categorize the modern Tarot in a similar manner, according to Skinner, it would have the following four categories and their elements associated with the 22 trumps.

Estates of Man (from lowest to highest):

There are also some elements that are shared amongst the cards between the four categories. Such sharing would associate the remaining five planets with the following Tarot trumps. Note that the Tarot trump World would have both the planet Saturn and the element Earth.


Four of the seven Christian Virtues are missing, and three of them could be shared between qualities associated with three roles in the Estates of Man. Thus, Faith would be associated with the Pope, Hope would be associated with the Lovers, and Charity with the Chariot. Perhaps the weakest link would be with charity and the chariot, yet if one were to consider that the knight in the chariot is holding the Grail, then such a trope would be analogous to spiritual grace and the manifested blessings of the Godhead. (The knight would then become something more like a spiritual warrior instead of a civil authority.) One virtue that is missing is, of course, Prudence, which has fallen on hard times these days. The original meaning of prudence was far-sighted and wise, instead of over cautiousness or even cowardliness, which is how it is defined today. Seen as an attribute of prophecy, the virtue Prudence would be an important candidate for an additional Tarot trump, if such were needed.

Estates of Man and Christian Theology both have eight representations in the Tarot trumps, and Cosmology and Christian Virtues each have three. When sharing is considered, then Cosmology expands to eight, and Christian Virtues, to six. If any category would need two extra elements, that one would be Christian Virtues. Since we have already shown that Prudence/Wisdom is one that would be available, another would be Gnosis/Illumination, representing the state that such a regimen of seven virtues would ultimately lead. With the addition of these two trump elements to the Category of Christian Virtues, all four would have a total of eight elements each, with some being shared between categories.

Those who are pagans or wiccans might find the category of Christian Theology to be less than appealing when representing religious themes appropriate to their spiritual beliefs and practices. Crowley’s Thoth Tarot deck has changed the Last Judgement with the theme Aeon, representing a more appropriate (and neutral) concept of an epochal related liminal or threshold crossing. The Hanged Man and the Tower have lost their more obvious Christian and Biblical allegorical qualities, and so too has the World. Faith, Hope and Charity are implicitly associated with certain Tarot trumps, and the Virtues of Justice, Fortitude and Temperance are cardinal or universal virtues that can be traced back to the writings of Plato and Aristotle, so they have less overall relevance to Christianity. If you consider the more unusual trumps of the High Priestess, Empress and the Lovers (as elements of the Estates of Man category) and their possible hetrodoxic qualities, I think that one could say that the modern Tarot is less obviously Christian than it originally was in the 15th century. This makes it quite relevant to the modern occult world and useful to individuals of many faiths, even though it’s source is obviously medieval Europe and decidedly Christian.

Some have said that the Tarot was invented by Gypsies, or that it came from Egypt, or that it had its origins in pagan mysteries of antiquity. Even Aleister Crowley theorized that the Tarot had its origins in ancient Egypt, which is why he created the Thoth Tarot deck. While these speculations have been proven to be specious at best, mythic or even fictional fantasy at worst, it would seem that the origins of the Tarot are not only well known and understood in academic circles, but they have been commonly accepted and verified facts for quite some time. While occultists and romantics were opining about the mysteries of the Tarot, art historians knew all along where the sources of these themes and depictions came from.

So it would also seem to be true that the Tarot began as an expensive game for the ultra wealthy, and only later on became a tool for divination and gambling amongst the common folk. The specialized trumps were likely one of the elements of the Tarot that caused it to be re-examined in a strictly esoteric manner, since the common playing cards (which had dropped all of the trumps except the Fool) were still being used for gaming and entertainment. Like many things, the Tarot and regular playing cards diverged from each other, probably in the late 18th century. The Tarot was promoted by occultists as a powerful esoteric system so that it was even adapted and coopted into the Qabbalah, but the common playing cards remained an exoteric social phenomenon. Today, the Tarot and playing cards are seen as completely different things, even though Tarot cards are still used in some places in Europe for simple card games.
Frater Barrabbas
Posted by Frater.Barrabbas at 8:00 AM