A Canticle for St. Frater Barrabbas 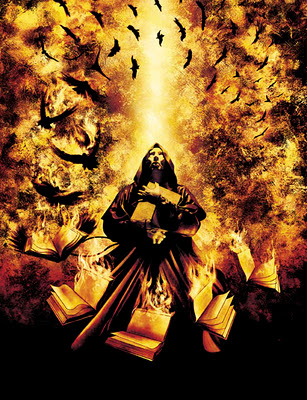 According to John Michael Greer, I have passed the self-initiation grade and I am a believer in Peak Oil and the decline and end of our industrial civilization. I won’t, of course, live to see it happen, but I believe that John is correct in saying that there is little likelihood of a different scenario playing out. According to some of the experts, the year 2005 was the year of Peak Oil, and from that epochal date, the amount of available crude oil will slowly decline, following the reverse bell curve, until it becomes a scarce commodity, sometime in the early 22nd century.
Will other forms of energy become available as alternates to the fossil-fuel based energy that we have been addicted to for centuries? I would say that it is very likely that forms of solar, wind and thermal energy will take the place of coal, gas and nuclear fuels; but they will not be able to completely replace our current level of energy consumption. Maybe some form of fusion energy will be developed and put into place before the decline really sets in. Still, that will take care of the need for electricity, but it will not fuel our need for transportation and the important use that petrochemicals play in our agriculture and industry. Perhaps we can travel and ship things via electric trains, or ships that use something other than bunker oil for fuel, but the days of modern cars, trucks, ships and airplanes are likely limited. Without all of these props of a modern technological world, our lives will be profoundly changed for all time, and we can be assured that changes of this kind will not be a good thing.

Mr. Greer is predicting a likely collapse of the industrial civilized world, and I feel that he is correct. You might disagree with him, but based on our currently available technology, a world without cheap crude oil will be one that will be severely diminished in many respects. Considering that the current technological world will probably not go out with a whimper but with a bang, our future progeny can expect to inherit a world wracked by endless wars, pollution, famine, pestilence, mass population shifts, mass population die-offs and the collapse of the fossil fueled based economy, technology and even civil government. Add to that radical climate change, and you have a fearful prognosis for the future. Since all of the governments in the world are unable and unwilling to make changes that might forestall such an eventual cataclysm, it would seem that our collective fate is sealed.

There is nothing that I can do to change this dire future except learn to live with less and at a much more modest level. This is part of my future retirement plan - survive on as little as possible without being poor or destitute. I think that it's possible for me to put together a life that is comfortable and sustainable until I am no longer amongst the living. I am going to try to go this route, ironically when many others are just seeking to retire at the same prodigious level of excess as their parents, or even greater.
However, one thing that I would like very much to do is to assemble a small cache of books and writings, all of them occult related, and some of them would include my own works, place them into an airtight and water-proof chest of some sort, and burry it in some strategic place where it might be found many centuries from now. I can imagine someone accidentally finding this chest of books long after the apocalyptic end of civilization as we know it, and after opening it, discover the many occult writings and ideas of an unknown author and occultist named Frater Barrabbas Tiresius. Maybe if I am lucky, the person who digs up this chest will be a monk of some future monastery, where such information of the past epoch has been gathered together for preservation, examination and study.

I can imagine this monk, toiling away, carefully digging the chest out of its hole, then recognizing that it’s from that distant time before the apocalypse. He would then eagerly have it transported by a mule team to his monastery, where it will be opened and the contents examined. The monks won’t know who I am, but I will be a voice from the past, presenting to them an exclusive collection of preserved secret knowledge and occult speculation to puzzle over. Maybe they will speak English, or maybe they will speak some kind of polyglot. A few will know how to read and write standard English, and I can imagine my books and papers being carefully examined, categorized and then safely stored away. At some point they will be studied by some scholar who will note them as an important find, and then seek to pull from them whatever is useful.

Who knows, maybe the information stored in those books and papers will help to trigger a renaissance of occult thinking and magickal practices. I might even be considered some important mage from the past and have some degree of fame amongst the small community of literati. I might even be canonized, and some monk might write up a canticle celebrating my mythic deeds. It would be a Canticle for Frater Barrabbas Tiresius, a mage from the pre-apocalypse time of mythic ill-repute and grandiose excess.

My papers and books might not be understood completely, if at all - or they might even be considered heretical. Who knows? Yet if I don’t plan for the creation of this chest, filling it with books and papers that can last several centuries and carefully burying it, then these scenarios have no possibility of ever occurring. Since I do believe that the far future is one that is dire, with even a long period of dark ages, then I can at least be certain that all traces of my existence will be completely and forever lost. Therefore, I have decided to produce this chest and its contents, and burry it where it will be found, but not too quickly. It will be a time capsule into the future, and it will be my hope that the distant ecotechnic future will find it useful, perhaps even giving me a place of honor amongst sages in the unknown future.

No one can really know exactly what the future holds for all of us collectively, but I think that John Michael Greer and others of his persuasion have shown the future for what it truly is, a time that will challenge humanity and maybe even cause its extinction. I hope not, but let us be prepared for the worst, and perhaps because of our meager efforts, a better world will come to pass in the mists of the future age.


Note: Apologies to Walter M. Miller Jr., for his Hugo Award winning novel, “A Canticle for Leibowitz,” whose theme was used to write this article.
Posted by Frater.Barrabbas at 8:00 AM