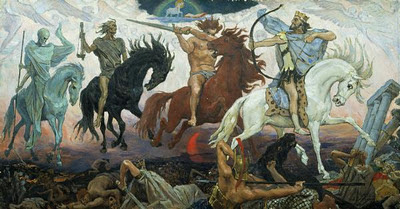 There has been so much buzz these days about the world coming to a complete end, with dispensationists like Harold Camping and others predicting that the apocalypse, as predicted in the last book of the New Testament, called “Revelations” has come to a final and terrible fruition. My friend and blog mate, Ananael Qaa, has been following the latest craze of predictions this year, and after each deadline, nothing has happened. All of the signs were clearly indicative, but the end of world failed to materialize. So I wonder what happened?

True believers would say that the Lord moves in mysterious ways, and the atheists and cynics would say that maybe the terrible God of the Christians just doesn’t really exist. Maybe the myths and beliefs are just that, false beliefs based on superstitious ignorance. However, the occultist in me doesn’t take sides with the atheists or cynics, instead I think that what is happening is an unfortunate literal interpretation of what is in reality a very allegorical and mysterious prophetic book of the Bible. I have heard it said and found it to be true that if you approach the Bible with a predetermined solution and look into its contents (ignoring all of the scriptural context) for justifications, you will indeed find them. Of course this could be said about any of the sacred scriptures or books of mysteries to be found in any of the religions in the world. A person’s perceptions can be ironically mirrored by Holy Scriptures if one digs deep enough or far enough into them, even if those perceptions are completely absurd. Perhaps one could say that the Godhead has a very subtle but quite real sense of humor, and that the joke is on us.

An odd truth is that I myself have found the whole concept of the mythical end of the world to be quite fascinating, and I have realized it in visions and powerful spiritual encounters. However, the difference is that I am not about to go looking for outward signs that the world is going to end suddenly and immediately after my visionary experiences.
If you read over Crowley’s book “The Vision and the Voice,” you will find that kind of mythic theme being repeatably expressed by him. Crowley told individuals that he was the Great Beast of the book of Revelations, but what did he really mean by that? Did the end of the world occur during Crowley’s lifetime and we just didn’t know about it. Actually, the truth is, yes, indeed, the world ended and then it started anew. It was what Crowley called the birth of the Aeon of Horus, and the mysterious date was in 1904, when the Book of the Law was channeled by Crowley’s wife. If you are a Thelemite, then this is an important great truth, to be celebrated during several days in April. So, Crowley was the Great Beast 666, and he caused the world to end through two great and terrible wars, but the world also changed and was reborn. To Thelemites, if the world ends, it is reborn at the same moment, which actually makes a lot more sense. Since that time of the start of the Aeon of Horus, some others have announced the beginning of other Aeons, which would either mean that the Aeon of Horus was rather short lived, or that those others were deluded, or maybe more than one Aeon can exist at the same time. I am not an expert in these matters, and all I have are my own experiences, so I would recommend talking to a real Thelemite about them.

For those who might not quite understand what an Aeon is, it’s analogous to an “age,” except with deeper occult implications. We all know that Christianity was born during the beginning of the age of Pisces, and that we are now waiting for the birth of the age of Aquarius. Some have said that the age of Aquarius has already begun, and others have said that it hasn’t yet arrived. An age is defined as a period of time that it takes for the natural phenomenon of the precession of the equinoxes to move through one whole sign of the zodiac. Precession through an astrological sign takes around 2,166 years, and precession through all twelve signs takes around 26,000 years. Thus an astrological age is roughly little over two millennia, and the movement is backwards, so that’s why the current age is Pisces, the previous age was Ares, and the next age is Aquarius. Is that quite the same thing as what Crowley was talking about in regards to the Aeon of Horus? Maybe it is, and then again, it more likely represents a powerful worldwide spiritual transition announced by some kind of spiritual avatar, which is what Crowley meant when he talked about it.

Whatever the case, as you can see, ages are born and then after two millennia, they pass away into another new age. The old order fails and disintegrates, and a new order rises in its place. Between the two ages there can be a lot of disruption, chaos, and even a dark ages lasting for hundreds of years. The beginning of the Age of Pisces also saw the beginning of the decline of the Roman empire, which as it fell, accelerated into the Dark Ages, at least for Western Europe. During this same period, the near east and the far east thrived, but Europe was thrown into chaos and barbarism for three or four centuries. With this in mind, it isn’t inconceivable that the Age of Aquarius may have a very dark and disastrous beginning for much of the world. Only time will tell, and human ingenuity will be severely tested when fossil fuels become less available and much more expensive to extract. What will save us is radically new technologies, but equally, what might doom us is our inability to change until we absolutely have to (and then its too late).

From my own personal experience, I have been having visions, from time to time, of the end of the world occurring through some terrible catastrophe, and often they are based on a kind of world holocaust. They have occurred in my dreams, visions, and in my communications with spirits. Yet I know that this phenomenon has to do with the crossing of spiritual boundaries and limnal points, and it doesn’t indicate that the world is literally going to end. I see it as a powerful and profound mythic and symbolic experience, but it represents that I have crossed a boundary to witness and see things that are beyond the threshold of this age. I am, ostensibly, seeing just slightly beyond this spiritual age and into the next one. Even so, what I am seeing is distorted and hindered by my beliefs, which are rooted in the current age. Still, I believe that as I become more spiritually advanced, I will be able to peer into the next great Age (or Aeon) and see it with a crystal clarity. I certainly haven’t achieved that degree of clarity yet, but some of what I have seen and experienced has been a potent influence on my magickal practices and spiritual beliefs. It is, in a word, one of the more important sources of my inspiration and creative magickal work.

So how does one break through the boundaries of the current age and experience the emanations of the next and future age? I don’t deliberately set out to achieve this phenomenon, but it does happen every time I work with mystical and magickal systems that test my current beliefs and force me to shed my biases and imbedded fictions. Encountering spirits, whether Godheads or even earth-based spirits, can have this effect, and so can meeting remarkable men and women. Pushing the envelop of one’s mystical and magickal knowledge can also produce the phenomenon of crossing the Aeon Threshold, as I call it. That boundary and barrier is out there, and most are comforted by it (abiding within its protective envelop), but others seek to break through it. I guess you could say that I have always been one of those whose search for occult knowledge and spiritual truth forced me test all of the beliefs that I possessed. To discard what was obviously false and to adopt what was shown to be experientially true, this relentless process could easily make today’s great realizations into tomorrow’s discredited delusions.
The process of seeking occult truth is without end, and it always leads one to that terrible and implacable boundary, with seemingly evil forces warding it from any entry. To cross this boundary is to experience the darkness and bitterness of the apocalypse, but just beyond that dark and terrifying vision is the dawning light of a new (and hopefully) better age. As a high plane traveler, I have skirted this boundary from time to time, hoping to catch a glimpse of the next great age.
Frater Barrabbas
Posted by Frater.Barrabbas at 8:00 AM