Why I Venerate the Golden Dawn 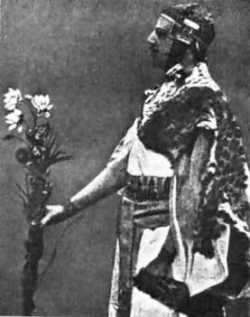 I got my first copy of the Golden Dawn book edited by Israel Regardie when it became a single volume. I can remember for a few years prior coveting the two volume version with its own slip case, but it was beyond my ability to afford. It was the great prize for anyone who sought to learn ritual or ceremonial magick, and was carefully displayed behind glass so it wouldn’t get stolen. The new Llewellyn edition was a single hardcover volume with a splashy colorful cover, but the price was right, and the old two volume edition was no longer in print. I bought the new version, back in the early autumn of 1975, and eagerly took it home to extract all of its secrets. I found that task to be nearly impossible, since my nascent intellectual skills weren’t really up to the task. I might have been a twenty year old adult, but my ability to read through hundreds of pages of arcane lore was a bit too much for my reading skills at the time. It would seem that I needed some background in order to fully master this lore.

After I joined the Coven from Hell, I was taught most of the material from the Golden Dawn book, except perhaps the initiation rituals, and that included the Qabbalah, the Enochian material and the basic rituals. Once shown how these rituals worked, I immediately began to incorporate them into my own ritual work. In less than a year, I had my own versions of these rituals, but of them, only the Superior Pentagram, Superior Hexagram, the Middle Pillar, Qabalistic Cross and the Rose Cross rituals were used. The hexagram was soon replaced by the septagram, which I had always preferred, but those other four rituals were seamlessly incorporated into my magickal repertoire. I did fail to figure out how to use the lesser pentagram and hexagram rituals in conjunction with the superior rites, so I never mastered the Golden Dawn methodology for performing elemental, planetary and zodiacal magick. Instead, over time, I invented my own independent system of magick, but the rituals, structures and devices were expropriated from the Golden Dawn. This is because there wasn’t any Golden Dawn organization for me to join, and to this day I remained an outsider to that tradition.

So it would seem that I used, in a rather cavalier manner, some of the magickal rituals of the Golden Dawn, some of the Enochian materials and pretty much ignored the rest. Since I had books from Aleister Crowley, I found that a combination of Crowley and the Golden Dawn seemed to help me fill in the void. Between these two authors, I was able to expand my knowledge and capability to craft and build my own personal system of magick. I was, in a word, an occult lore pirate, and both Israel Regardie and Aleister Crowley facilitated that plundering. I am sure that many others have found this published material both useful and practical, however, others within the Golden Dawn tradition have called both of them oath breakers. Had they not published the material from the Golden Dawn, I probably wouldn’t have been able to craft the magickal system that I did eventually derive. So I owe a debt of gratitude to these two individuals who are not honored in some of the more traditional Golden Dawn circles.

Since that time, I have moved on and now use my own tried and true ritual structures, devices and components, all of which are now far removed from the Golden Dawn tradition. I have also refrained from purchasing any materials that are supposedly culled from secret documents that are still in use by that order. I have done this out of respect for the active tradition of the Golden Dawn, and because this lore would obviously not be particularly relevant to me or my organization. Thus, I wouldn’t bother seeking to purchase any of the revelatory books published by either Farrell or Zelewski, since I feel that such published works are quite disrespectful to those who are working within a living tradition of the Golden Dawn.

I am also quite cold to anyone writing a history of the Golden Dawn where the founders, such as Westcott and Mathers, and others, are reviled as frauds or shown to be incompetent. Years ago I read Ellic Howe’s book “Magicians of the Golden Dawn” and considered it a harsh and even scurrilous biography of that organization. I have no illusions as to the follies, flaws and failings of individuals and humanity in general, but I think that I would rather focus on the accomplished work of such individuals instead of attempting to judge them many decades after their death. This is why I consider Aleister Crowley to be an important writer and contributor to western occultism regardless of how he behaved or what kind of man he was while alive. So, for me, these individuals are judged by their work and their legacy. If they left behind writings that I find important to my own occult work, then I will judge them as a valuable resource, and nothing more. I think that its pretty tough to judge someone without personally knowing them, and even harder to judge someone who has been dead for a long time.

Whatever I think of the original founders of the Golden Dawn must therefore be based entirely on their work. There is so little historical information about Mathers that his life story has become something of a cipher that holds nearly any opinion, from the gloriously good to the vilifyingly evil. Aleister Crowley painted a picture of Mathers that was very dark and disturbing in the so called fictional work “Moon Child,” and Dion Fortune supposedly accused Mina Mathers of having cursed her. I think that both of these opinions are likely fictional creations that do a great injustice to both of these individuals. If I were to judge the founders of the Golden Dawn, it would be to venerate them, since the Golden Dawn lore was so ahead of its time and such a radical departure from anything that had been practiced in the 19th century up to that time.  I would have to consider Mathers, Westcott and others to be creative geniuses, since the Golden Dawn lore was so advanced. The fact that the rituals and documents of the Golden Dawn are still relevant today, in the early 21st century, should demonstrate just how advanced the lore was back when it was first presented to members of that order. To members of the order back in the early 1890's, the lore must seemed like something totally radical!

Some have said that the founders of the Golden Dawn were frauds or incompetent, and that their vision of the world, populated with rare encounters with flesh and blood advanced high adepts is a myth or a delusion. I think that the Golden Dawn lore speaks for itself, since either the founders were incredible geniuses, or that they had help from other unnamed individuals. These mysterious personages would have been quite enlightened and likely members of an elite organization, which was called the Third Order. Either perspective shows that Mathers, for all his supposed flaws and social issues, was a true adept and facilitator for even higher adepts (visible or invisible), since he was, after all, a man, and the lore that he presented to his order was beyond anything previously seen in the western world. For this reason alone, I venerate Mather’s unwitting contribution to the occult world, which is his legacy, and I also venerate the Golden Dawn. I may not be a member, but as an outsider, I can easily see its long term value.
Frater Barrabbas
Posted by Frater.Barrabbas at 8:00 AM