Day of the Dead - Unveiling and Visitations 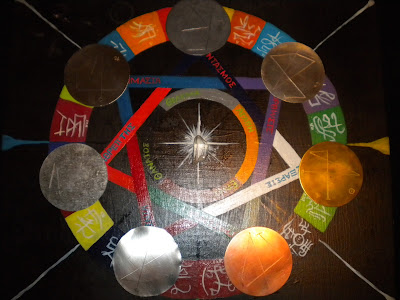 Now the shift in weather and climate up here in Minnesota becomes frigid, shadowy and grim, and winter’s long reign is just about to begin its triumphant coronation. It is the Day of the Dead, and I waited until this moment to unveil all seven of my metallic talismans and group them into a septagram array. Yet I had not planned on doing this specifically on this date. Since November 1 came on a weekday, just like Halloween, I had little planned for either day. Despite having completed my own project work for my job, I had to help others with their work as well. It was, therefore, yet another busy work week for me. Still, this impromptu working was precipitated by a rather strange visitation, since it was also the first anniversary of my mother’s death.

While my girlfriend and I were watching television together during the evening after dinner, a strange occurrence happened, and we both witnessed it as it occurred. All of a sudden, the stereo system that is hooked up to the television began to diminish in audible volume. I quickly looked over to the stereo amplifier and noticed that the numbers associated with the volume control were quickly dropping down to zero! This happened without anyone apparently working the controls (there is no remote control for the volume, I have to turn the volume knob to do that) and it seemed as if the stereo system was dropping down the volume automatically. To this date, I have never seen my stereo amplifier behave in this manner until that evening.

This phenomenon sure got my attention, and also the attention of Grace, my lady. I had initially thought that she was mischievously turning the volume down from her laptop, since she was multitasking - watching TV and doing her homework. When I asked her if she doing something, she smiled and told me “No, it’s not me, but perhaps it’s your mother paying us a visit.” I had forgotten the anniversary date of my mother’s death and the thought that she was doing this was the furthest thing from my mind. We both looked at each other, and I felt that what Grace had said was correct. I then noticed a subtle feeling of “otherness” that tingles through my body whenever something strange or possibly paranormal happens. I then thought aloud that I should probably go into the temple this evening and commune with my Mother’s spirit. It seemed like the right thing to do. So after turning the volume back up, we watched our program and then turned everything off for the evening.

One thing that had occurred to me while thinking about this odd phenomenon is that in years past, my mother would turn down the volume of the TV set to get my attention when she wanted to speak to me. I had the usual lazy demeanor of a youth who would ignore everything and everyone while intently watching the TV, and so to counter that, my mother would turn down the volume and stand in front of the television to get my attention. Perhaps, wrapped in her ghostly form, my mother was doing something that was her motherly prerogative from years past when I refused to pay attention to her. Well, it worked! She certainly got my attention, and at that moment, I sensed her presence.

Now perhaps this belief that my mother was making a ghostly appearance that evening was nothing more than purely a subjective sentiment on my part, maybe even being a form of suggestion first proposed by my girlfriend. There are probably a number of explanations for the stereo suddenly dropping its volume level. It could have been an electronic fluke or some other scientifically explainable phenomenon. Still, I believed that it was a message from my mother and a bit of ghostly poltergeist activity, even though it was subtle and could have multiple explanations. Yet experiencing this odd occurrence caused me to visit the temple and perform some minor workings that I had been intending to do for the last few days but had so far failed to do. So when my girlfriend retired for the evening, I went straight into the temple and lit some candles and ignited some incense.

I took out the seven metallic talismans that I had generated over the period of the last nine months, all of them safely ensconced in their velveteen bags, and pulled each one out and carefully placed it on my septagram trigon. This was the first time that I had arrayed all seven of these talismans, and after placing all of them on the septagram, and then making some invoking passes over them with my transmutar wand, I felt the array of planetary powers sync up to generate a kind of unified field. That energy which I sensed coming off of the talismanic array was far more powerful than I had thought it might be, and I was greatly impressed with the result. Without even consecrating the magic circle, I felt a sphere of magical energy fill the temple. I was quite impressed, since here before was the very magical machine that I had been previously writing about, and it was indeed simultaneously full of the entire spectrum of planetary possibilities. I now had my empowered and sacred space ready, and I began to commune with the spirit of my departed mother. It took a bit of discipline to wrench my attention away from the talismans, but I also found that the energy field that they created greatly assisted my attempt to contact my mother. It was as if she was already there, and her presence was subtly but fully tangible to my senses.

My mother, whose name was Arlene, talked with me for several minutes, and I could hear her voice in my head and see her in my mind as she looked some years ago, in the grace of her autumn years. I also saw her memories of her youth, her long dead parents, and the home that she grew up in. She told me about her last days and that she sought and embraced death, so that on the Day of the Dead, she was able to pass from her dying and nearly unconscious mortal form to one of spirit, and that moment was not one of fear, but of joy and release. Even though the link between us lasted only several minutes, what was passed between us seemed like an enormous discourse filled with memories, thoughts, regrets and moments of acute happiness. It was as if I had been given a tour of her life. She made certain to tell me that we are forever linked by the fact that she gave birth to me and raised me up to adulthood. All I needed to do was to focus on that link and she would appear to give to me whatever she was able to give me, which would be, in a word, her undying love and nurturing. I felt blessed by this knowledge, and it brought tears to my eyes.

She also spoke at length about my father, who is still alive, and also that she has sought to contact my brother and sister in the same manner that she has contacted me, but without as much success. Since I was the youngest, my mother, for whatever reason, had talked a lot to me after I had become an adult, seeking encouragement, advice, and often, just a patient ear (qualities that my father truly lacked or was incapable of giving her). Then my mother’s spirit slowly slipped away, but I now had a truly ancestral ally to contact and to venerate. My mother had never been against my spiritual and occult pursuits, unlike my father and my close relatives. She had always insisted that I find happiness and fulfillment wherever that might lead me. Arlene wasn't very religious or very spiritual, but she never went against the social consensus, taking a balanced and sensible approach to nearly everything. She was nominally a Christian woman, but she went to church to sing in the choir (not to save her soul), since music was her greatest inspiration and pleasure. My hope is that she is able to indulge in her musical passion now that she is unfettered by a frail and aging human body. It was odd that during my encounter with her spirit, I didn't hear any music. Maybe, next time I will provide her with some of her favorite church music just to see if it will get her to musically respond.

After the visitation was over, I focused for a while on the septagram array of metallic talismans and reveled in their powers and possibilities. This was just my first taste of how this magical machine might function, and I was quite impressed and pleased with the results. I am definitely looking forward to all future workings with these devices, and in fact, I am preparing a revised version of the Septagramic Vortex Gate ritual to inaugurate a truly inner plane expositions, powered and inspired by these seven wonderful talismans.