Another Plug for the Self-Directed and Self-Initiated 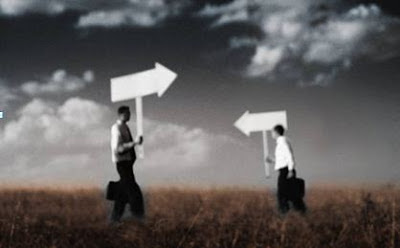 Recently, Nick Farrell has written up an article on his blog (Playing At Magic) complaining about New Age seekers who eschew traditional occult organizations and attempt to master the art of magick by dabbling with it. Of course, to embellish his arguments he has created an inept straw man analogous to Goethe’s Sorcerer’s Apprentice to target his complaints - a person so naive and foolish as to be nothing short of a cartoon. You can find his article here, but still, I feel it’s important to respond to what he wrote, since I am indeed self-taught, self-directed, and therefore, self-initiated. While I don’t believe that his article in anyway describes who I am and what I have done over the previous decades, I find that by behaving as an elitist he is missing a very important point about how things are changing in the world of magick and the occult. Mr. Farrell is on the downward path to becoming a dinosaur, an irrelevant anachronism simply because the math doesn't favor his opinions or his vaunted initiatory pedigree.

Those who are members of Golden Dawn temples or initiates in one of the many occult organizations that seek to promote the traditions of ritual or ceremonial magick are the blessed and lucky few, while the rest of us have had to make due with what we can. The amount of written material on the subject of magick which can be found on the internet and in books is already quite voluminous, and it is quickly growing even as I write this article. There is a vast body of information available to anyone who is either curious or who desires to engage in the magician’s avocation. The number of available temples and organizations is still quite small, and I might add, fairly exclusive.

What this means is that the probability of someone acquiring their knowledge and experience of magick by reading and experimenting is much more likely to occur, in other words, by being a dabbler. As time goes on this disparity will only continue to grow until the population of initiate members of these exclusive groups and organizations will be tiny compared to the population of self-taught and self-initiated magicians. Such a course of self-determination and directed learning even has a fancy label - it is called heutagogy.

So, it would seem that the future of ritual and ceremonial magick belongs to the masses of dabblers and dilettantes rather than to the so-called properly initiated members of occult organizations and formal traditions. Similar to what has happened to the formal traditions of Witchcraft over the last few decades, vastly more individuals are seeking to engage with paganism and witchcraft without either joining a coven or getting initiated into a tradition. Eventually, such formal traditions will be something of a fading anachronism, and I believe that newer and more dynamic sodalities will take their place. The same thing will happen to magical lodges and traditions unless they open up and place themselves in the midst of the wave of change that is enveloping the practice of ritual and ceremonial magick as well.

There are a lot of self-trained magicians out there in the world today, and in fact, most of the magicians that I know, even including those who belong to occult organizations are mostly self-taught and self-directed. This is because competent magicians have achieved their results due to their own personal efforts, discipline, experimentation and individual accomplishments. I have also met individuals who were spoon-fed and supposedly trained by some lodge or another and who were actually quite incompetent. What makes someone a good magician has a lot to do with individual initiative, inspiration, and steadfast application of a foundational discipline. There is no guarantee that a Golden Dawn or Thelemic magician will be competent just because he or she received extensive training. This is why I feel that such exclusive organizations are on the brink of being buried in a deluge of dabblers and dilettantes unless they, too, change with the times.

When we consider that William Gray, one of the great occult and magical luminaries of the recent past, was completely self-taught, self-directed and self-initiated, it poses the argument that perhaps magical orders, temples and traditions are not as important as the various members of these groups seem to believe. I wrote an article a while back celebrating those steadfast and stalwart individuals who have blazed the trail of self-made magicians and occult masters, and you can find it here. While Mr. Gray was a unique individual in his time, he represented a new path and possibility to many who didn't have recourse to a traditional lodge. Now, many decades later, there are many who are following this insular path. I suspect that the path that Mr. Gray forged will soon become the major way of mastering magick, if that event has not already come to pass.

Some have said that I am, as a model of the self-taught and self-initiated, not a good representative of this population because I did receive an initiation into a witchcraft tradition. I have also received other initiations in other organizations as well, but the system of magick that I use and have promoted through the Order of the Gnostic Star is mostly my own. Whatever claims I can make about what I have achieved over the last forty years is due to my own work and initiative. No one taught me how to work magick - I learned it from books and mostly from a lot of experimentation. I may have taken this work to its logical conclusion over many decades of time, but I don’t believe that such as what I have accomplished has made me unique or different from the mass of other seekers and dabblers.

In fact, the whole premise of the Order’s method of teaching and initiating is based on the continuous process of transformative ordeals. A student is given the rituals and lore, and then challenged to use them to achieve a given end, the details of such a working are to be determined by discovery and personal insight. Once the ordeal is complete, then the members of the temple confer an initiatory elevation as a kind of collective recognition, but the work has already been done. This is indeed a form of self-initiation, but it is one that is quite effective and proven over time.

I also think that it’s disingenuous to compare self-direction and self-initiation in occult, spiritual and magical studies to that of an engineering, medical or other professional occupation. While it might be optimal to actually have access to an occult and magical college, it isn’t a requirement for a practicing magician. Plenty of competent and capable magicians exist who have not had that kind of training or instruction. There isn’t a board exam for ritual or ceremonial magicians nor do such individuals require any kind of licensing. The evaluation of magical, spiritual or occult competency is actually quite subjective, and like any art form, it requires a certain consensus of peers. Also, getting a group of magicians to agree on anything might be a bit of a stretch, too.

What is required for anyone to master the art of magick is nothing short of a practical and rational approach to mastering anything. It requires persistence, experimentation, constant research and sometimes leaving no stone unturned in the pursuit of operational knowledge. Thus, sane and rational experimentation, building a loosely defined peer group and developing a consistent and continuous spiritual and magical discipline is the real key to a mastery of magic. This is true regardless of whether or not the magician received training within an organization. Learning to be creative and "thinking outside of the box" are techniques that can't really be taught to anyone. They must be individually mastered and thereby incorporate certain innate talents. Not everyone who is persistent will produce remarkable results, but they will produce some kind of results none-the-less.

Few Golden Dawn organizations appear to be doing anything about the fact that people are acquiring first class publically available information and engaging in a certain amount of dabbling. Many seem to be condescending towards the masses of the uninitiated and act more less as entitled elitists, an attitude that will guarantee a relative future morbidity. What is needed is some kind of outreach, since the population of the self-taught far exceeds the population of the traditional initiates. I look at what Jason Miller is doing with his online classes as representing the cutting edge in disseminating a practical knowledge of magick. David Griffin and his organizations of the HOGD and the A+O have put together an outreach program called the “Thousand Points of Light” which can somewhat mitigate the lack of resident temples available to aspiring initiates. My magical order is taking this approach as well with the affiliate member program.

While I applaud the outreach that some organizations are undergoing for those many thousand points of light, there must always be a place at the table for the self-made magician as well, and in fact, they will soon be far more numerous than a thousand points of light; more like a sky brightly illuminated with a myriad of stars. The best thing that can be done for these so-called dabblers (I prefer to call them experimenters) is to make more foundational lore available to them either through published materials or online articles.

I believe that I have and continue to engage in both of these efforts, and so do many other groups and organizations. However, publishing books and making information available online will only increase the supposed problem. What we all have to realistically do is to make the information and contacts available and let nature take its course to sort out the truly determined from the curious and half-hearted dilettante. In time those who are gifted or just passionate in their pursuit will float to the top of the wave, and they will justifiably demand to be given a certain amount of respect. We can already see some of those individuals now, writing blogs and even publishing books. As a member of their loose sodality, I salute them.

After considering these important points we can now examine the claims and complaints written by Nick Farrell in his article. I find his arrogance, hubris, and condescending attitude to the self-taught and self-directed to be quite obnoxious. It is, in word, the smirking, sneering face of the entitled pedigreed snob whining and complaining about the unwashed masses. Yet I have found much of Nick Farrell's writings to be quite lacking in accuracy and insight, all despite his supposed training and guidance by the hands of superior adepts. It makes his arguments hollow and irrelevant. Even so, his vaunted place in the corridors of the occult elite is a precarious and even delusional imposture, one that we will proceed to quickly ignore and forget.